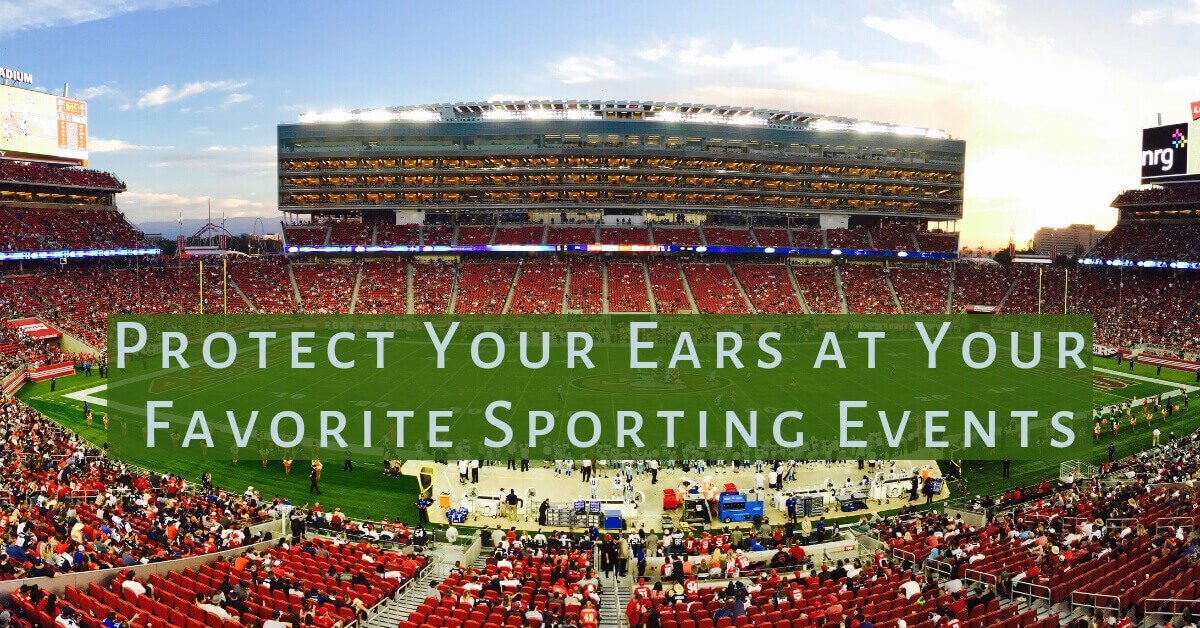 Did you know that sporting events can be dangerous to your hearing? Sporting events are actually some of the loudest environments you could ever put yourself in. Sometimes the loudness of sports events is precisely what draws people to them. Monster truck rallies, demolition derbies, and NASCAR races traffic in the roaring engines of cars and trucks. Sometimes it’s not what is happening on the court, or the field, or the track that is the loudest. The massive crowds at sporting events produces an immense amount of noises. The sheer volume created by tens of thousands of people coming together to scream and shout and cheer—and, often, to play instruments that create even more noise—is often described as simply deafening.

Apart from the noise of the crowd, there are other loud noises that are produced off the courts, fields, and tracks as well as. The amazing displays of fireworks and the loud engines of fighter jets that are used to kick off sporting events such as football games can generate massive amounts of noise. The sound systems through which music and announcements play are often quite loud, as they are meant to be heard over the other loud noises generated at sporting events.

All told, the decibel levels reached at sporting events can be extremely damaging to your hearing. A study conducted in the American Journal of Audiology reported measured sounds at sporting events. The researchers found that “Dosimeter measurements showed that noise at 6 of the 10 basketball games exceeded acceptable intensity levels.” At NFL games, crowds can generate noise, on average, between 80 and 90 decibels (dB). This is according to Jack Wrightson of the Dallas’ acoustical consulting firm Wrightson, Johnson, Haddon & Williams, Inc.

Exposure to this level of sound over the length of a football game—which hovers around three hours—can be quite dangerous. Even more so when the crowd itself is competing for the badge of loudest crowd in the League, which is what happened when the crowd at a Seattle Seahawks game, when they reached a Guinness Book of World Record of 137.6 decibels. This crowd noise is almost equivalent to the sound level of jet engines during takeoff. NIOSH has also measured sound at race car tracks, noting that they can reach up to 140 decibels in the pits, where cars pull off for minor repairs. They can reach up to levels around 96dB in the stands and 114dB for drivers.

The Risk for Noise-Induced Hearing Loss

Ultimately, the sound levels at sporting events can permanently damage your hearing. The National Institute of Occupational Safety and Health (otherwise known as NIOSH) explains that exposure to 85 decibels for more than eight hours can lead to permanent hearing loss. This is why it is important to protect your hearing even in places where you are getting swept up in the excitement and maybe not thinking about healthy hearing habits.

There are many ways to protect your hearing at sporting events. The easiest way is to bring along a pair of earplugs. There are generally two styles of ear plugs. One is the soft, foam earplug that you can buy at a drug store and even in places like convenience stores and gas stations. Be sure to properly insert these ear plugs: squeeze them with your fingers so that they become quite small, and then hold them inside your ear canal for 5 seconds while they expand. This will ensure that the plugs properly mold to your ear and block out the most sound possible. You can also upgrade to custom made ear plugs, which a hearing health professional will fit just for you. Custom ear plugs fit inside of your ear canal, but they also cover your entire ear bowl, ensuring that sound is well-blocked.

Another easy way of protecting your hearing is to purchase over-the-ear protection, called earmuffs. They look and fit like over-the-ear headphones and come in a range of styles—some which simply muffle sound and protect your hearing, and others which contain noise-canceling technology to ensure that you are fully protected. Whether or not you are wearing ear protection, it is a good idea to take short breaks from the loud sporting event you are attending to give your ears a rest.

Have you experienced changes in your hearing? Do you often attend loud sporting events and are concerned that noise levels may have affected your hearing abilities? Contact us at Encore Hearing today to schedule a hearing test or to learn more about custom hearing protection.