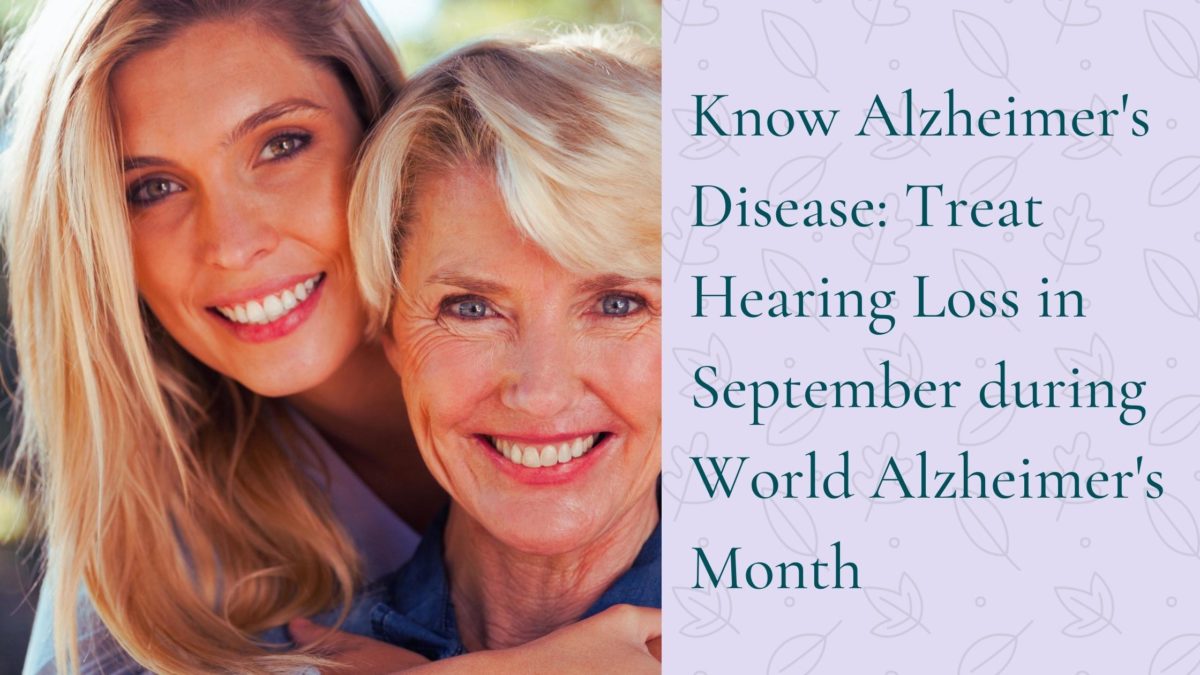 This month is World Alzheimer’s Month! September 2021 marks the 10th year of this global awareness campaign. Organized by Alzheimer’s Disease International,  this initiative focuses on challenging the stigma associated with dementia, a chronic condition that impacts 50 million people worldwide. Dementia includes a range of medical conditions that affect cognitive functions like memory, thinking, learning, and decision making. There are several types of dementia but the most common form is Alzheimer’s which accounts for 60%-70% of all dementia that people experience. Alzheimer’s does not have specific causes so identifying and treating risk factors is an important way to reduce one’s risk. Treating hearing loss, which is a risk factor for Alzheimer’s, is a useful intervention that you can take to protect your health!

Alzheimer’s is a condition that gradually deteriorates cognitive functions related to memory, thinking, and language. It most commonly starts with mild memory loss and can escalate to reduced ability to remember family and friends, communicate, and make decisions. This has numerous effects on one’s personality, health, and relationships. People with Alzheimer’s can experience difficulty completing tasks and managing daily life, requiring greater assistance and care.

According to the Alzheimer’s Association, 6.2 million people currently have Alzheimer’s in the United States. This is projected to rapidly increase, by more than double, reaching 12.7 million people by 2050 – underscoring the importance of prevention. The brain can experience changes a number of years before the onset of Alzheimer’s. Researchers suggest that this window allows for interventions that can prevent or delay the development of Alzheimer’s. One such intervention is treating hearing loss.

A significant amount of research establishes a correlation between hearing loss and cognitive decline. Various studies show that impaired hearing increases the risk for developing conditions like Alzheimer’s. This includes a major study  that was published in 2019.

Conducted by researchers at Brigham and Women’s Hospital and Harvard Medical School, the study involved analyzing data that captured the hearing and cognitive capacities of over 10,000 participants (ages 62 and older). After an 8 year period, researchers found that compared to people without hearing loss, people with hearing loss were likely to experience cognitive decline. Specifically finding that cognitive decline was:

This significant correlation shows that not only does hearing loss increase the risk, but that the degree of hearing loss (mild to severe) also increases risk. These findings as well as additional research shows that hearing loss not only happens in the ears but also the brain. Researchers suggest that the parts of the brain responsible for processing sound become inactive as a result of hearing loss. This inactivity can lead to a decline in cognitive functions or impact the brain in ways that reduces capacity.

Treating hearing loss is a great way to transform your hearing and overall health which reduces health risks including developing Alzheime’s disease. Treatment begins with a simple step: scheduling an appointment for a hearing test. Facilitated by a hearing healthcare provider, like an audiologist, hearing tests involve a painless process that measures hearing capacity in both ears. This identifies any hearing loss, the degree, adn specific type that you could be experiencing. Once your hearing needs are established, your hearing healthcare provider is able to make effective recommendations to meet those needs. The most common treatment for hearing loss is hearing aids. These are electronic devices equipped with the technology that help absorb, amplify, and process sound; maximizing hearing ability.

Hearing aids alleviate hearing loss symptoms, enabling people to hear and communicate with greater ease and effectiveness. In addition to enhancing hearing, research shows that hearing aids improve brain health. This includes a 2020 study published in Science Daily which involved researchers examining the impact of hearing aids on the brain for nearly 100 participants (ages 62-82). They analyzed cognitive capacity before the use of hearing aids and 18 months after using hearing aids and found that, “97% of participants showed either clinically significant improvement or stability in executive function (mental ability to plan, organize information and initiate tasks)”!

If you have experienced changes in your hearing, we’re here to help! Let World Alzheimer’s Month this September inspire you to contact us today to schedule an appointment for a hearing test.